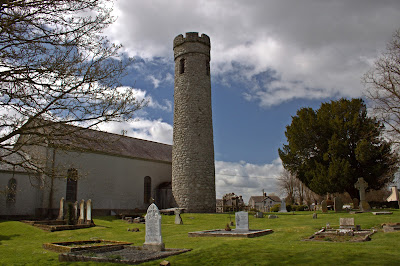 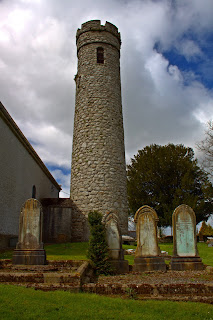 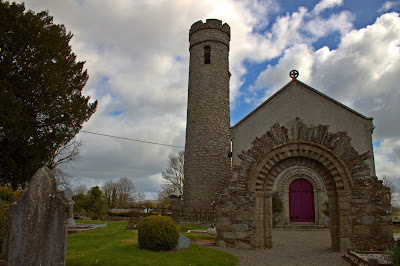 Castledermot is one of Ireland's more unusual round towers, the stone work and much altered top gives this tower the look of a giant turret.
The tower dated 10th Century stands to a height of 20 meters, the doorway is at ground level and cannot be seen as it now connects the tower with the modern church via a passageway.
The history of the site:-
St Dermot founded a monastery here which was plundered by the Vikings in 841 and again in 867.
Cormac Mac Cuilleannain the famous scholar, King and Bishop of Cashel was buried here after his head had been cut off in battle in 908.
The monastery was plundered in 1048, and the last known abbot of the monastery died in 1073.
Along with the tower this site has a Romanesque archway (bottom image), two high crosses (with the base of a third) and the only known hogback stone in Ireland.
With so much to offer, I would hope to share more of this site in the future.
Posted by Tony Mulraney at Wednesday, May 01, 2013 No comments: