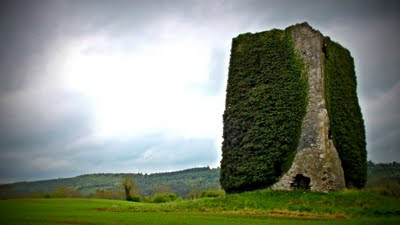 Dove Hill Castle sometimes know as Dove Hill Norman Tower or De La Poer Castle was built in the 14th century.
The ruin is located on what is believed to have once been a large medieval site, the Castle is very characteristic of the many fortified tower houses that King Henry VI had built by his knights for a grant of ten pounds to help secure his presence in Ireland.
One of the castles keepers Connel O'More a chieftain managed to pack quite a lot into his time at Dove Hill his story includes - the daughter of a wealthy Norman - un returned love - vengeance -
The Black Plague murder and penance in the Holy Land.
Posted by Tony Mulraney at Monday, June 27, 2011 No comments: