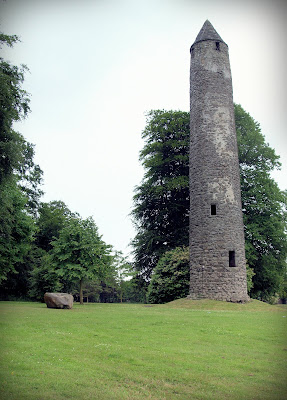 The Round Tower and Bullaun Stone are impressive reminders of Antrim’s ancient monastic settlement. The tower is thought to have been built around the 10th century and it is known locally as The Steeple. It is 28 metres tall and is one of the finest of its kind in Ireland.

There is an unusual cross carved stone above the lintel and also eight simple flat headed windows. The monastic site was burned in 1147. The conical cap was reset after the tower was struck by lightening in 1819.

The large stone that can be seen to the left of the tower is known locally as "The Witch's Stone" the folklore is that of a witch who jumped from the summit of the Round Tower to express her dissatisfaction with its construction. She apparently landed on a large stone leaving in it the impression of her knee and elbow. And as a result to this day the rock is known as the "Witch's Stone".
Posted by Tony Mulraney at Monday, August 08, 2011 2 comments: