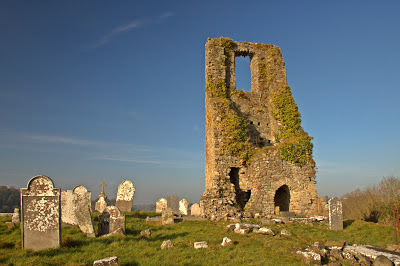 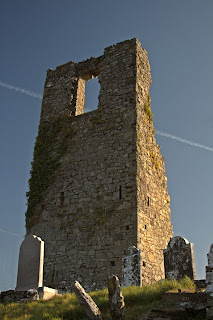 This is the very striking tower of Ardmulchan church.
It stands overlooking the sweeping Boyne river with Dunmoe castle visible in the far distance.
Ardmulchan derives its name from Ard Maelchon, "Maelchu's Hill".
The tower seems to stand to its full height and can be climbed almost half of the way up-on a very uneven stairway.
The church is dated over 500 years.
Mass continued to be celebrated here as late as 1613.
All around the tower is a mix of graves some very recent and some ancient.
The site also has graves from the Great Famine.
It is claimed that the cemetery wall that surrounds the tower was built with the stones of a nearby destroyed castle.
Posted by Tony Mulraney at Thursday, March 07, 2013 1 comment: