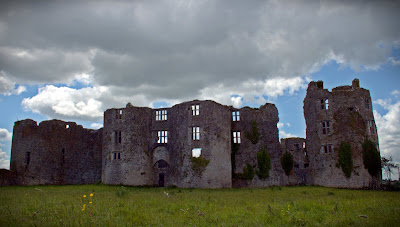 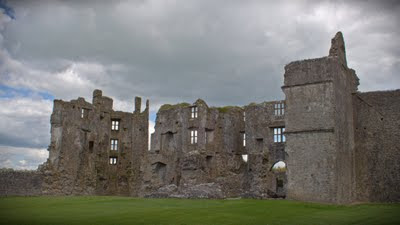 This Norman castle was built by Robert de Ufford, Lord Justice of Ireland, in 1269. But it passed into Irish hands seven years later when it was taken by Hugh O'Conor, King of Connacht.
The O'Kellys gained possession of the castle in 1308 when Donogh O'Kelly slaughtered many of the inhabitants. But the O'Conors took it again in 1341.
Taken by the Earl of Kildare on an expedition to Connacht in 1499, it was granted to Mac William Bourke in 1544, and taken once again in 1569, this time by Sir Henry Sidney.
Sir Nicholas Malby, Governor of Connacht, probably took it over in 1578.
The castle surrendered to the Confederates under Preston in 1645, but they in turn had to surrender it to the Cromwellians under Reynolds in 1652.
The castle is quadrangular in shape with rounded bastions at the corner, and a double-towered entrance gate, as well as a rectangular gate tower in the west wall. After 1578 Sir Nicholas Malby carried out extensive alterations and inserted a number of mullioned windows as well as adding a number of buildings on the north side of the castle.
Posted by Tony Mulraney at Monday, August 01, 2011 No comments: