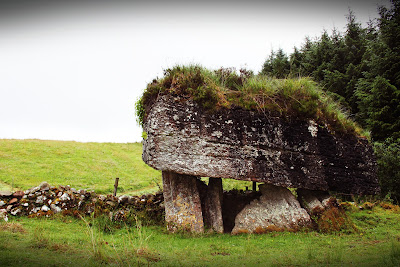 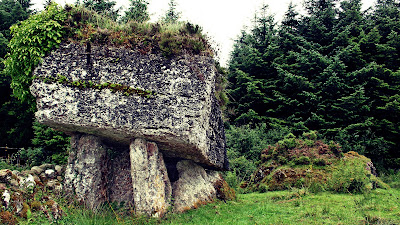 The Tomb consists of a well-preserved chamber with a large capstone, weighing around 70 tonnes, and measuring 4.4m long by 3.4m wide and 2m thick. It rests on four supports. The two portal stones at the front have a blocking stone behind them to seal the chamber. It has not been excavated in modern times, but Lady Louisa Tennison of Kilronan Castle may have removed cremated remains from it in the middle of the 19th century. It is called Labby after the Irish word leaba, meaning bed, and derives from the folk belief that this portal tomb was used as a sleeping place of Diarmaid and Gráinne when they were fleeing Fionn MacCumhaill.

The best way to get to the tomb is via Cromlech Lodge Hotel, you walk up through a pine forest (arrows are marked on the trees telling you which way to go) and before you know it you are at this impressive tomb.
Posted by Tony Mulraney at Tuesday, January 17, 2012 No comments: