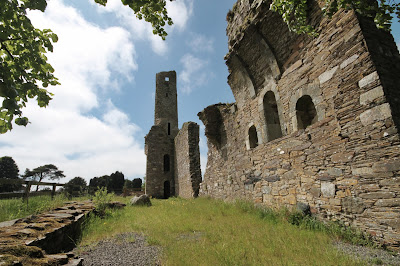 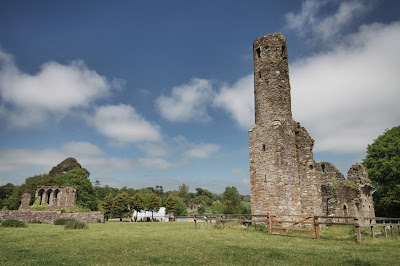 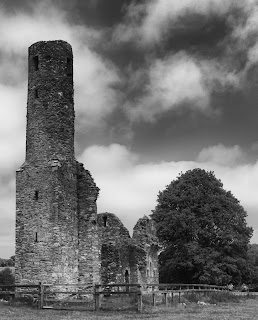 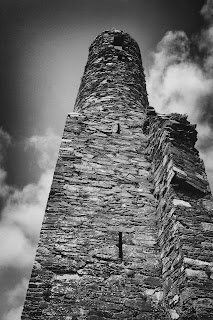 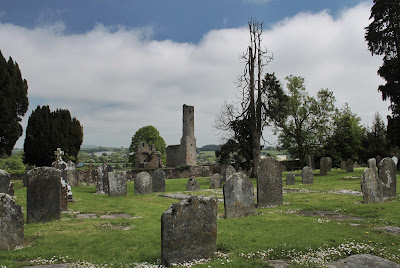 Ferns round tower is a rare type of round tower to be found in Ireland but is not unique.
The majority of Ireland's towers are free standing but there are exceptions to this, examples can be found in such places as Glendalough (St Kevins)  and Killashee (Kildare).

The overall look of Ferns tower would also remind you of the free standing tower of Kinneigh which has a hexagonal base and gives way to the more traditional round section.

The tower here has a square base and rises to a height of over 18 meters.
The top of the tower has four square lintelled windows.  It also contains several defence slit openings.

The site of Ferns originally dates back to the 7th Century when it was founded by St Aiden.
Ferns was attacked by Vikings in the 9th and 10th Centuries.

The round tower is part of St Mary's Abbey which was founded by Diarmuid MacMurrough in the 12th Century.


The Ferns site also has a 13th Century cathedral and four high crosses one of which (only the base/shaft remaining) is said to mark the grave of  Diarmuid MacMurrough.

Access - parking can be found quite close to the site.
The tower can be accessed via the cathedral (to the left of the tower image no 2).