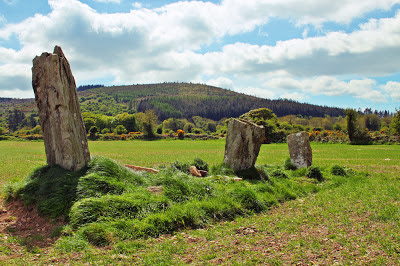 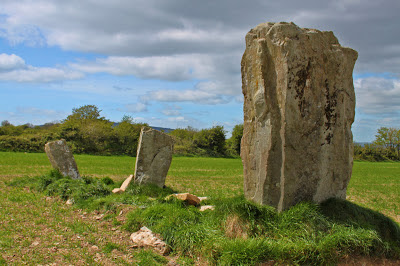 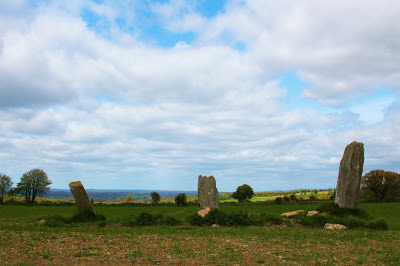 Gneeves stone row / alignment is one of many to be found in and around Mallow Co Cork.
How I came to find this stone row was all down to luck.
While searching for Garrane stone row  (unsuccessfully) I asked a local - John if he knew of Garrane.
He knew about one in the area I was looking in but was not sure of the exact location.
I described what the stone row looked like to John who then said to me that he had one of these in his fields !!(turned out to be Gneeves)
Running out of time (work) I asked would it be possible to see Gneeves.
A few minutes later and after a short walk down through a couple of fields (past a bull) you stand facing the stone row.
The biggest of the stones is well over 3 meters with the smaller two about half the height of the main stone.

As I worked my way around the stone row we talked and what came across was that I was in the company of someone who is very proud of the alignment on his land.
About 20 photographs later I was on my way back to the car.
On the way John told me of an old image he had come across of his grandfather working beside the stone row - the image was 100 years old and the stone row had not changed.
So another 100 years on and I can not really see much changing with this stone row (wish I could say the same about many other sites).